Ahmed Yassin was the co-founder of Hamas alongside Abdel Aziz Rantisi. Yassin served as the group's spiritual leader until he was killed by the Israeli military on March 22, 2004. Yassin encouraged Hamas's campaign of suicide bombing and martyrdom against Israel and asserted that the entirety of its territory belonged to Palestine. He also frequently conflated Jews and Israelis in his violent rhetoric and encouraged the targeting of Israeli civilians. His killing was internationally condemned and his funeral procession was attended by 200,000 Palestinian mourners. 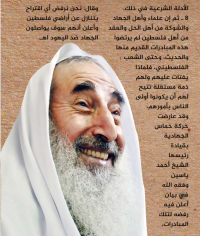 Najibullah Zazi is an Afghan-American who drove from his home in Colorado to New York City on September 9, 2009 with the intention of detonating explosives above the New York City subway during rush hour as part... Read more