The Secret Relationship Between Blacks and Jews

"The Secret Relationship Between Blacks and Jews" is a three-volume, antisemitic text published by the Nation of Islam. It presents a multi-layered attack against Jews and promotes false claims about how Jews allegedly control Black people. For example, it makes conspiratorial accusations about disproportionate Jewish involvement in the transatlantic slave trade, blames Jews for promoting a myth of Black racial inferiority and claims that early 20th century "Jewish businessmen" worked to subjugate Black people and enrich themselves by masterminding the rebirth of the Ku Klux Klan. First published in 1991, the text continues to be regularly promoted by the Nation of Islam. 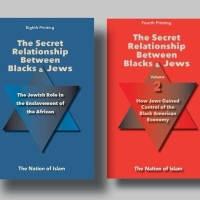 Saviours' Day is the Nation of Islam's annual commemoration of the birth of its founder, W. Fard Muhammad. The multi-day annual conference which coincides with Saviours' Day regularly draws thousands of people and features antisemitic, bigoted commentary... Read more