"New World Order" is a term used to refer to longstanding right-wing conspiracy theories about a socialist or communist one world government. These conspiracies have been popular for decades, but this term became particularly popular among anti-government extremists from the 1990s onwards. It has largely replacing older theories about a global communist conspiracy. "New World Order" conspiracists believe that a tyrannical, socialist "one-world" conspiracy has already taken over most of the planet and schemes to eliminate the bastion of freedom, the United States, with the help of collaborators within the government. 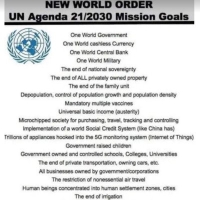