The Branch Davidian standoff, in the late winter and spring of 1993 in Waco, Texas, was a violent confrontation between federal law enforcmeent agencies (the ATF and FBI) and members of the Branch Davidian religious sect. The standoff started after an ATF raid on the Davidian compound caused a violent shootout that resulted in the deaths of four ATF agents. A 51-day standoff followed this initial encounter, after which the FBI used force to end the standoff. Approximately 80 Davidians, including a number of children, perished on that final day, either by fire or their own hand. The event galvanized the extreme right in the United States and helped spark the formation of the anti-government militia movement. The Branch Davidian standoff, or simply "Waco," has since been used by extremists to support the argument that the government is willing to kill those who oppose it. 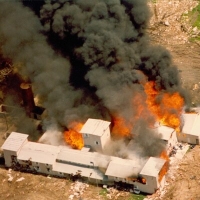